Bitcoin (BTC/USD) and other major cryptocurrencies re-appeared in the headlines this week as a combination of crowd psychology and speculation briefly drove the price of BTC/USD to the June high before retreating back below the critical level of resistance, formed by the key psychological price of $40,000.

Elon Musk Tweets: The Impact of Social Media on Markets

Although Bitcoin prices enjoyed double-digit gains at the start of the week, Amazon’s denial of allegations that the group would be accepting Bitcoin as a payment method by the end of the year hindered the ability for bulls to maintain favor above $40k.

After opening above trendline resistance at the start of the week, Bitcoin prices pushed through $40,000, rallying into a wall of resistance just below $41,000. After retreating back to $39,000, bulls and bears continued to fight over dominance as price action temporarily stalled between the 8 and 34-period Exponential Moving Averages (EMA). 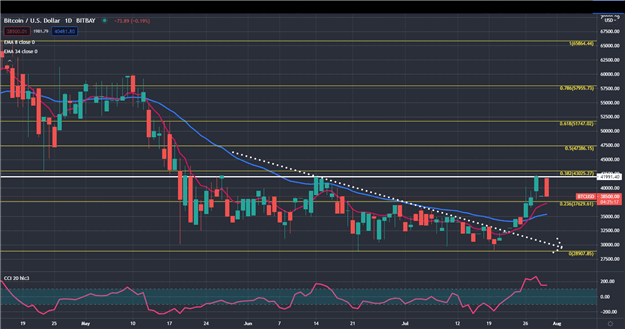 The below 4-hour chart further illustrates the narrow range of recent price action around the $39,000 mark. With the recent formation of shorter candles indicating a potential decline in the momentum of the trend, the key levels of support and resistance for the imminent move remain between $38,000 and $40,000, at least for now.

In contrast, selling pressure may gain traction if prices fall below $37,000 with bearish an increase in bearish momentum bringing $33,000 back into play.

Sterling is poorly position to seize any Fed-fueled rise